They gave me the basic instructions before they sent me on my way. No physical activity other than on a leash to potty only for the next two weeks. She is on the same dosages of pain killers as she was before, 150mg Rimadyl 2 x per day and 150mg of Tramadol 3 x per day. They also wanted to prescribe her Acepromazine to keep her calm, but seeing how that is not a sedative that should ever be used in Mastiffs I refused it. Instead they gave me a prescription for Xanax, which I have to go to Walgreens tomorrow and fill. I have never given a dog or heard of a dog getting Xanax, but a quick question in one of my Mastiff groups confirmed it is used commonly in dogs and is quite safe. I'm also supposed to pick up some Pepcid for her and give it to her twice a day for 5 days to help keep her stomach settled. The leg is supposed to be ice packed (directly on the incision) for 10 minutes 3-4 times per day and she is to go back then to have the staples removed and for a recheck and in two weeks. At that point they will give me further instructions for beginning physical therapy.

Here she is when we first got her in the house, she was so happy to be home. We pottied her and then came back in and she went in her makeshift pen and laid right down. 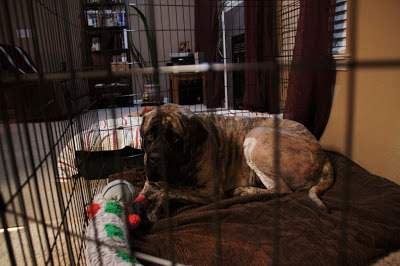 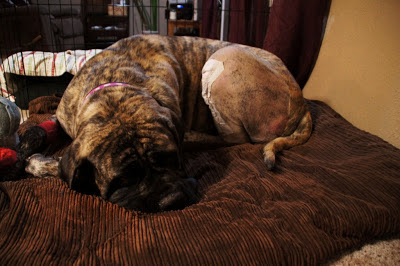 Once she got settled we had to peel off the sticky bandage covering that was over the incision. They generally take if off before they send them home, but I convinced them to leave it on for our 2 hour car ride so she didn't have to wear the e-collar in the car. I'm actually not sure if it would have fit in the car if it was on her. This is what her leg looked like after we got the super sticky bandage off of it. It looks pretty good. Her leg does have some swelling and it has settled in her ankle a little bit, but all in all I'm impressed at how good it looks at this point. 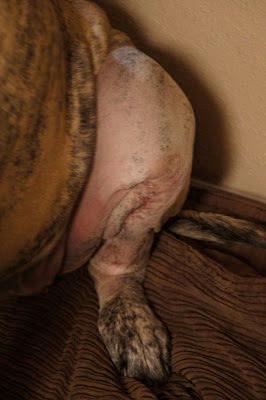 But then we had to put on the e-collar so we didn't lick it. Not to happy with the e-collar. Is that not the saddest face in the world? 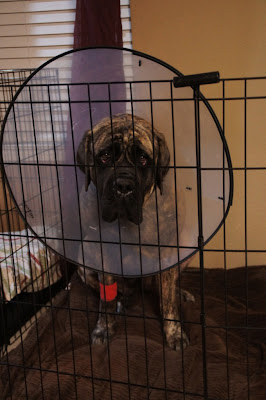 She is being pretty whiny at this point. Hopefully she'll get over that pretty quick. She's had a bit to drink and we're going to have some raw hamburger and a chicken leg quarter in a little bit. I'm going to ice it now.
Read about how Brinkley's journey began here:
A Mastiff's Journey Through Cranial Cruciate Ligament Surgery﻿