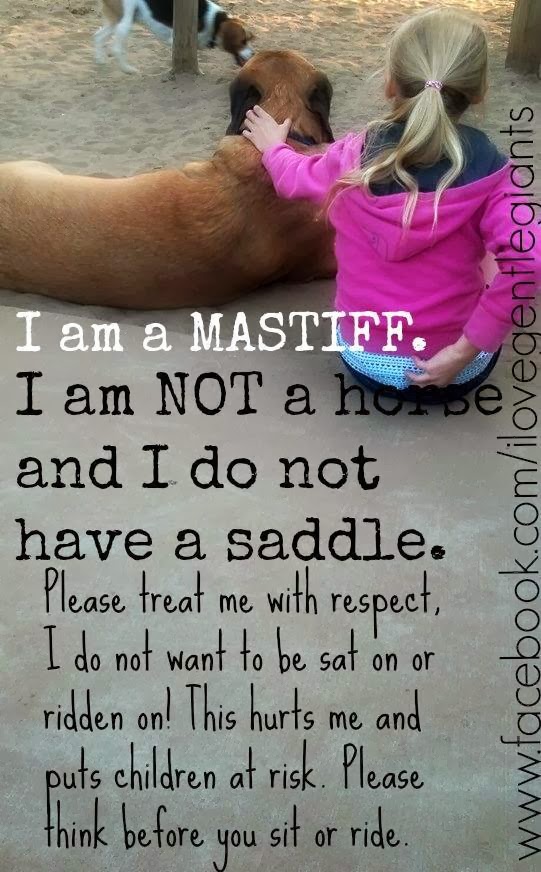 For anyone who missed the “Mastiff Commercial” on the Superbowl on Sunday here’s a replay.  A kid makes a rude and disobedient comment to his mom, she’s totally okay with it, and then the kid insults his brother.  The brother jumps onto the back of a Mastiff and rides the dog.  Sounds oh so cute, it was all CGI, so no harm done right?  WRONG.  Doritos sent the message to millions of viewers on Sunday, many children included that it is in fact okay and cool to ride dogs like horses.  Supporters of the commercial argue its all digital, the dog wasn’t actually ridden and to stop being “haters”.  So if being a “hater” means I’m unselfish enough to care about all the dogs that will fall prey to injury and perhaps be put to sleep because of permanent damage to their spines then I guess I’m a hater. Or what about the dogs that react to the pain and bite the child, think those dogs won’t die unjust deaths as well? In the numerous arguments back and forth going on online right now, what the general public doesn’t know that us in the Mastiff world have been fighting for weeks, pleading, sensibly might I add, for Dorito’s (Frit0-Lay) and their parent company Pepsico to not air the ad that has the potential to condemn 100’s of dogs across the country to pain and death.

Don’t care about the dogs.  We’ll let’s look at it this way.  A dog is an animal; even the most trusted pet is still an animal.  You can never say never when it comes to a dog biting someone.  If you do you’re naïve.  So when some kid that saw that commercial takes the 5 seconds his mom isn’t watching him to sit on top of the family dogs back the first thing that will happen is that dog will feel pain. A reaction to pain in a canine is to bite or snap at what’s causing them pain.  What’s in the line of fire?  The kids face.  That alone is enough reasoning to not promote this ad campaign.  Doritos ignored feedback from 100’s of people because, well, I guess the almighty dollar speaks.  They couldn’t care less.  Makes you all warm and fuzzy inside to buy their products and support their ethics doesn’t it.  Not so much. I know I will be making a conscious effort to avoid purchasing any of their products in the future.

Below is a comment to someone complaining about us “haters” and how we should just accept how cute the commercial was and get over it.  Best response I’ve seen yet far better than I could have responded and shared with her permission:

Today, I went out to the beach to walk 3 of my male Mastiffs...it was a nice day here in Southern California. Just before I hit the sand near a boardwalk that leads to a local pier where people fish from and stroll to enjoy themselves I was approached by two men in their late 50's...they made a statement:

"How much for a pony ride."

In my typical fashion (as of late), I don't turn to look nor do I respond....it's taken time to hone that skill down and not come back with a snappy response that in the past (when I was younger) I would've involved the guy's wife or his buddy with something like:

"Oh about the same as riding your wife." Or: "You tired of riding your 'bum-buddy' there?"
Yes I'll admit it sounds rather crass...never mind the visual...but I've hit middle-age rather hard and no doubt I'll get even more cantankerous with age if I don't begin biting my tongue when it comes to individuals as such.
I knew the better as to what one of the two men meant...I mean come on...the "funny idea" (known as a joke) of what they were inferring was not lost on me.
These boys of mine are the quintessential of what a typical Mastiff should look like...and they're big....big as a horse I guess according to these chaps...or chumps if you will.
Now that being said, "Do I give a crap about what a person's (meaning one) perspective and silly statement?
Not really...but when it comes to a commercial that reaches the ears and eyes of multitudes of folks I'm going to have to say I beg to differ.
I wish I had enough toes and fingers that I could count on about people from the general public (and not just with children...old and young adults too) that have made attempts to literally "ride" my Mastiffs (that are show dogs by the way) while on walks, at dog parks, special events and even at dog shows such as Westminster and Eukanuba in front of me!!

I won't even go into how much that it took of every fiber of my being NOT TO COME UNGLUED! And making every attempt to be "civil" about it and educate all the while.
"Yeah, but it's a commercial." Heard that before too...have you ever heard of folks re-attempting "Jack-Ass" stunts even after being told on the screen "Do not attempt this at home." declaration and committing injury to themselves?
Just look at Youtube if you don't believe me.
When it comes to my Mastiffs, I can ill-afford to have a "laissez faire" attitude and unfortunately (or maybe fortunately) I have to do the thinking for people who approach me and want to meet and pet my Mastiffs...it's only fair to all those involved...but more importantly to my boys and girls...
Posted by Gryphon Mastiffs at 3:16 PM